Mum’s birthday. What do I cook??? She has recently deemed a new cake cookbook she purchased as her favourite thing since sliced bread….well maybe not that much, but she is very excited, so I thought I would do something out of that for her. I did think however maybe the choice should be her’s and I am glad I did as she told me to make one of her favourite cakes which I forgot I was saving to bake for this day.

I lie actually, I made it a couple of weeks ago but that recipe was stupid, or maybe I was the stupid one to listen, as it instructed to put a springform tin into a waterbath to cook the cake. It is evident that the bottom half of the cake was absolutely soaked! Straight to the bin it went….

I researched and found many recipes for souffle cakes which did not require a waterbath and decided on one. The key to this cake is creating as much air as possible and being very delicate and careful when you do finally fold everything together as you want it to be as light and airy as possible, so if you are too rough or stir rather than fold, you will get rid of a lot of the air bubbles.

Once you pout it into the springform tin (no waterbath this time) you bake it slowly for a long time. If you cooked it fast the outside would cook and the inside would remain raw, so be patient and it will turn out like this…..

Crusty on the outside and soft and fluffy, to the point of it melting in your mouth, on the inside. It is for this that it is so appropriate for any event as it is rich yet light and wont leave you feeling like you just ate a brick, you might even go back for a second one.

When I served this to my Mum she was just in heaven and did, like most girls, continue to cut slithers to make themselves feel better about not having a second slice. My twin brother was convinced it was just too rich and did not understand why I was putting a large scoop of ice cream to have with mine….some boys just don’t know how to enjoy decadence!

All in all Mum loved it, which is the most important thing. We had a simple do for her birthday this year, but I know she did not mind as she got exactly what she wanted…..the best chocolate cake in the whole wide world.

1.Preheat the oven to 160 degrees C and grease a springform tin.
2. Over a double boiler melt the butter and the chocolate together then take off the heat and cool slightly.
3. Beat the egg yolks with half the sugar  until pale orange, light and fluffy, and so that the beater creates ribbons through the mixture.
4. Using a rubber spatula fold the chocolate with the egg yolk mixture. Set aside.
5. In a ‘clean’ bowl with a clean whisk attachment, whisk the egg whites on medium speed until soft peaks form. Add the rest of the sugar and whisk until you reach thick glossy peaks. Stir 1/3 of the egg white mixture into the chocolate mixture, then fold the chocolate mixture into the remaining egg whites (be careful not to loose a lot of air out of the mixture)
6. Pour the mixture into the prepared tin and bake for 30-40 minutes or until the top is just browning and it has risen up substantially.
7. Refrigerate while still in the pan for at least 3 hours (as you might break it if you took the springform off while it is still hot) then serve at room temperature with ice cream.

Yesterday was my best friend Kelly’s birthday. Happy 24th! We started celebrating the night before with dinner at Intermezzo Restaurant at GPO which was fabulous……and last night we continued with a bowling party. Although I am a terrible terrible bowler, it is surprising how much fun you can have when everyone has not done it for such a long time, I was not as bad as I thought….although compared to my competitive bowling family, scores of 82 and 75 would be shunned upon, they only get scores over 200. I might be bad at bowling but I knew that I would redeem myself with the birthday cake I baked for Kelly.

The cake is called Dobos Torte is a traditional Hungarian cake which consists of layers of sponge and chocolate butttercream with discs of toffee coated sponge on top. I appreciated that it is great in the traditional way, but I wanted to change it up a bit. I based the cake around the recipe from Canelle et Vanille, however I altered my creams a little. I decided to ditch the toffee pieces on top as I thought the cake was rich enough. The buttercreams were a bit different too, the inside being brown butter salted caramel buttercream, and the outside is that buttercream with dark chocolate and cocoa.

I must admit I was quite worried when I presented it that it would be too rich, too buttercreamy and noone would like it. This was her only birthday cake so I could have possibly ruined her birthday. Luckily EVERYONE loved it and were so impressed by it, especially Kelly. Phew! Just over 4 hours to make and it was gobbled down in 5 minutes. Definitely worth making, you just need lots of bowls and to be patient when making each component, it is worth it in the end.

This is my recipe, or the best I can devise as I did so many things impromptu, so I apologize if you end up with bowls of buttercream or toffee leftover.

3. Beat the egg yolks, 2/3 cup of icing sugar, and the vanilla with a mixer until pale yellow and forms a thick ribbon in the mixture (approx 3 mins).

4. In another bowl, using clean beaters, beat the egg whites until soft peaks form. Gradually add the remaining icing sugar and beat to form stiff, shiny peaks. Using a large rubber spatula, stir about 1/4 of the beaten whites into the egg yolk mixture, then fold in the rest.

5. Combine the flour and salt then sift half the flour over the eggs, and fold in; repeat with the remaining flour.

6. Spread the batter amongst the sheet pans as flat as you can and bake until lightly golden on top (approx 7 mins) Let the sponge cool.

NOTE: To make the sponges a consistent flatness put a piece of baking paper over the top, just as they have come out of the oven, and using another flat tray gently press it down so that it becomes flat and even.

1. In a small saucepan mix water and sugar and then leave over high heat to start caramelizing. (KEEP AN EYE ON IT) Cook until it is a deep golden brown colour then remove from the heat immediately.

2.  Very carefully pour in one cup of water, being mindful that it will splatter so pour slowly and step back.

3. Whisk over medium heat until it has reduced slightly and feels sticky between two fingers. (approx 10 mins)

1. Cook butter until brown. Pour through a sieve then cool.

2. Put cooled butter into a mixer bowl and slwoly whisk in the first 2 cups of icing sugar. The mixture will start to get thick so add some of the caramel and cream, then continue to add sugar. Repeat until it looks like below and then add salt to your taste.

NOTE: You will have left over, use it for the chocolate buttercream after you have laid out the layers of your cake.

1. Cut the sponge layers into thirds and place on your serving plate which is lined with some baking paper. Place the first layer of sponge and using a knife, spread an even layer of the caramel buttercream over the top. 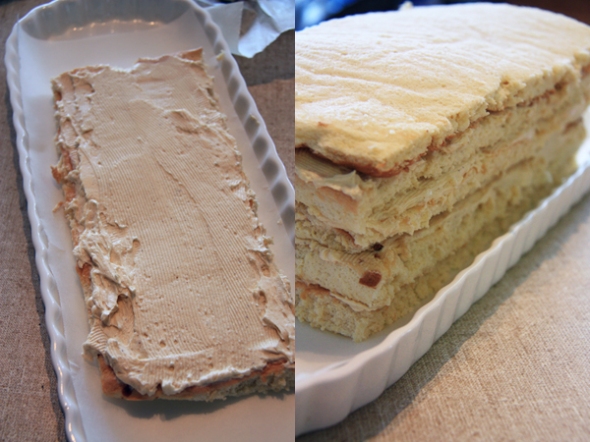 2. Repeat with other layers until you have placed the last layer of sponge on top.

4. Decorate with sprinkles or smarties etc. Refrigerate until 30 minutes before you want to serve it.