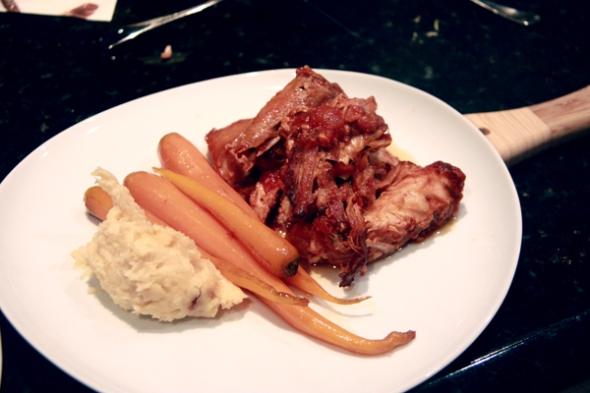 So it has been a fair while since I have posted. Lots has happened in the past couple of months including adjusting to my new job, breaking my wrist and trying to do anything with my cast on, and also getting through Greek Easter, graduation and Flaounes making which all happened on the same weekend.

It seemed as though when I cooked it was only quick dinners as time got past me, or the limited time to prepare anything for a party left me feeling ashamed of the non creative plate I was bestowing on the host. Finally though, a dinner party where I not only had time to cook, but also time to prepare something unique and delicious.

I had a week to devise something impressive but also something challenging to myself. Recently I have been going down to my local butcher, Pino’s Dolce Vita, and choosing something new to cook every week. They are specialists in sausages and cured meats but they also have a huge range of meat, poultry and game to whip up. I had a look at what was in the window and there were things like beef cheeks, veal cutlets and other more common meats, but I really did want something less seen, so I asked if they had rabbit……OF COURSE they do, but it is brought in fresh to order, and let me tell you, when I got my rabbit the flesh was so pink that you could tell how incredibly fresh it actually was. I was so excited at the challenge.

Rabbit is an animal I have wanted to cook again since my first attempt, which was a very “good effort” was overcooked and dry as I did  not know how to work with this delicate meat. When cooking the meat it requires your full attention because like poultry or other white meats, it is so easy to overcook and be dry and tasteless.

I have continually come across recipes which stated rabbit stew, rabbit terrine or even assiette of wild hare. There are many ways to cook rabbit more than simply applying to a heat source. I really wanted the meat to keep its juices and be succulent and flavoursome. I therefore decided to treat the meat as something I could slow cook, something that can soak up all the flavours from the juices it was in.

So I did just that, cut up the rabbit, threw it into a casserole dish with tomatoes, garlic, sausage, white wine and cinnamon quills. Simple. Lid on. Bake for 6 hours on 150 degrees  and ta da! Soft rabbit meat falling off the bone. DELISH!! I was so happy with my dish, I could not wait till my friend tried it. Finally something different I could take to a dinner party, something you won’t find commonly at restaurants and overall a very cheap meal. 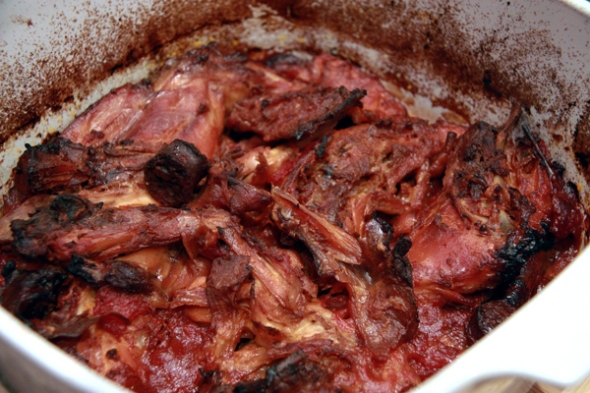 The response was fantastic, and we even found a wine that matched perfectly, although a very unexpected pairing, an 2010 Arbois “Trousseau” from Jura mmmmmmmm

1 rabbit cut into 6 pieces (with bone)

2. Roast for 6 hours, turning every hour (if there is not enough liquid add some more wine and tomatoes)

1 cup milk (use cream for a richer taste)

1. Peel parsnip then chip into cubes. Roast until cooked through and slightly browned on outside.

2. Put cooked parsnip into a blender with the milk, butter and Parmesan. I wanted a texture that was not completely smooth, but if you wanted it to be smoother, add more milk. Set aside)

3. Peel carrots then boil until cooked (note that they will not all be the same size so you will have to constantly take out the cooked ones individually as you don’t want some to over cook). Once cooked put in a bowl of cold or iced water to stop cooking them.

4. When ready to serve put carrots into a pan with butter and golden syrup and cook until they start to get crispy.

5. Portion up the rabbit, parsnip puree and carrots onto a plate and enjoy with a glass of Trousseau.

They have a full breakfast and lunch menu and beautiful coffee and sweets.

This entry was posted on June 17, 2012 by forque. It was filed under Recipes and was tagged with bake, game.