I have wanted to cook something from my Movida Rustica cookbook and have been eyeing this cheesecake out for a long time. It is a Spanish baked cheesecake, not an Italian baked ricotta cheesecake that everyone knows well, and unlike those “Cheesecake Shop” styles, it is light and fluffy, how I like my cheesecakes. Best of all this recipe is gluten free! 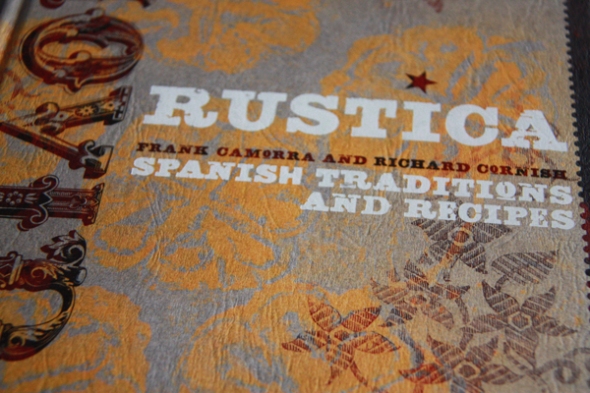 Cheesecake has been one of my favourite cakes since I was a little girl. I always used to request a baked cheesecake from a particular bakery in Bardwell Park for my birthday which was as light as a marshmallow, it just dissolved in your mouth and was dangerous if you were left alone with it and a knife. Within half an hour you would just notice the cake gradually getting thinner and thinner as I took thin slithers stealthily, knowing I had overindulged but enjoyed every bite so much. I must admit though, I loved the base of that particular cake, but now since discovering my gluten intolerance, such past times are not so enjoyable and that is why this recipe is so promising, Light and fluffy but that caramelized crust on top just giving it that little extra that you do not even need a base.

This ridiculously easy recipe originates from San Sebastian in the north of Spain and once cooked in a hot oven sugar is sprinkled over the top and finished off with a blowtorch to caramelize the sugar. It when served whole it could even look like a crema catalan due to this similar finishing technique, but once you take a spoon you will discover the soft luscious texture which dissolves on the tongue. Look away and it will be gone before you know it!

Today however was one of those days when you don’t quite have enough of anything and due to the gloomy cold weather you can possibly fathom venturing outside to the shops so make do and improvise, which I do actually love. Every recipe can be pulled and tugged here and there to produce a nearly the same if not better outcome. So I had a little less fresh cream, I used thickened cream. I did not have goat’s curd so in went more philli. No lemon rind, but a touch more lemon juice was added. Finally my large circular springform tin was lent out, as something always is, so out came the tart dish, a mini springform tin and 2 ramekins.

5 minutes after it started cooking I walked past the oven and almost jumped out of my socks as they had risen a lot and I was worried they would overflow, but as I discovered when I pulled them out to sprinkle the icing sugar on top for the last stint, they just sunk. It was kind of depressing as this beautiful, velvety cake, which almost looked like a souffle does what is the fear of all cooks and ‘lets off some steam’. I knew it probably was supposed to and I was to cook it for 10 more minutes but no cook likes to see something sink down in front of their eyes.

I had also lent out my blowtorch to a friend when I delivered a creme brulee last month and have forgotten to collect it, so I had to use an alternative method for the caramelization of my crust. A HOT HOT grill will do the trick, as it will to make Naan bread, I discovered once. They are very handy and can be used to do many great things. Of course the result is not as pretty as the one in the book, but I am sure Frank Camorra would be impressed for a quick effort. 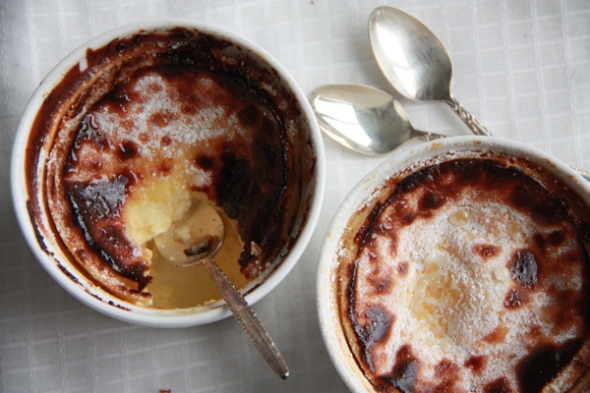 2. Lightly grease a 25cm springform tin with butter, the dust with flour, shaking out the excess.

3. Place all the ingredients except the icing sugar in a food processor and blend until smooth. (about 1 minute then it will be thick and all combined). Pour into the prepared tin and bake for 30 minutes or until just set.

This entry was posted on October 6, 2011 by forque. It was filed under Recipes .