I am constantly looking for new challenges and since I am extremely interested in baking I thought something that is not usually attempted is Panettone. This Italian bread is eaten at Christmas and enjoyed all over the world, but because it is so time consuming to make, people just buy it. There are some fantastic packaged ones, although they can get quite expensive, but I think they will always have more chemicals and so on to keep them fresh.

My partner eats Panettone every Christmas eve once the clock strikes 12, so I thought I would make a fresh one which I know exactly what has gone into it. surely all those preservatives aren’t good for you. Finding a recipe was one of the hardest parts. I looked on the internet, in books and asked around, but all I found was a heap of webpages which were not written in English. I could have translated them but I worried that some expressions might not convert over quite the same. Then the second time I looked it up on the new I found that Gourmet Traveller had done a version of Panettone which was all laid out, easy to read, and so this is what I based my recipe on. (Find GT version here)

I know it would take a long time so I started early….7am. It was quite a warm day so the rising actually did not take as long as expected. The whole process was relatively easy, it was just long and time consuming as you leave it to rise 3 times for 1-2 hours each time. It was not too bad though as I went down to tan by the pool in the meantime, so time went quickly. 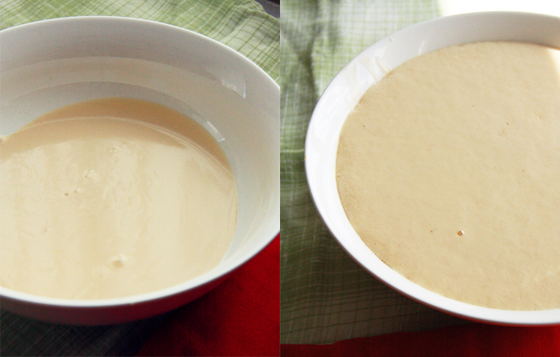 By the time the last rise was finished my dough was going out of control and had started to overflow out of the baking tin…even though the estimated amount of rising time had not finished, I knew it was ready to go in.

Ok so this is where I had a problem. I followed the instructions and browned it at 190 degrees for 10 minutes then cooked it on 170 degrees. However, I skewered the bread after half an hour and it seemed fine so I took it out and cooled it.It looked great I thought, a part from the overflowing side, but not too bad for my first attempt.

It wasn’t until it cooled completely that I tried to cut it in half when I discovered the centre was not cooked. The skewer test had failed me. So back into the oven it went but with foil over the top.

So I suppose my message is that it does need to be in the oven for a total of 1 hour, and do not be scared of using alfoil, it will save you from my horror. My first attempt did turn out fine in the end, a little bit ugly and mangled, but it tasted good and as I am not in a 3 star restaurant, that is good enough for me…..this time, next time I bake it for Christmas it has to be perfect, but that is why I did a test bake as I knew there were things I would get wrong out of such a long process.

Next week I know how to alter my method and just tweak things here and there and it should work out great…..until then I will enjoy my mangled panettone tonight.

This entry was posted on August 9, 2011 by forque. It was filed under Uncategorized .