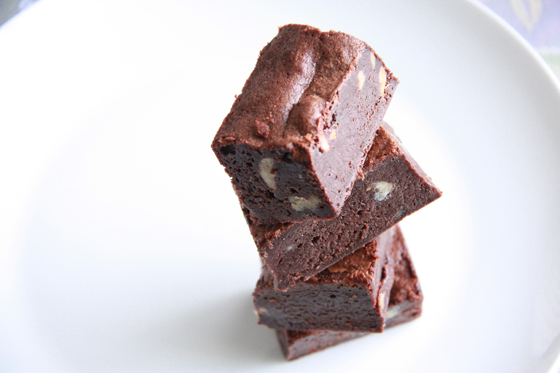 Everyone who love brownies would have to agree with me that they are better soft, rich and gooey in the centre. Really, who likes brownies that look like overcooked, dry cake? Definitely not me. I must admit though, I was never good at making brownies and always managed to stuff them up one way or another. My Mum was actually the Queen of them in my house, until one day……. I was at home during the day for the first time since starting Uni this year and could not fight the itch to whip up something.

However, disaster! We had NO ingredients in the house. No chocolate. No condensed milk. Minimal nuts and not a lot of butter. So instantly my repertoire of decadent desserts I could have made was demolished. One thing I did have though was cocoa. I did a quick search on the net and found this “Cocoa Brownies“. They looked pretty damn good and ticked all the boxes brownies should tick. Rich (tick) gooey (trick) no chocolate though! Hold it! No chocolate? The only other good brownie recipe I knew was Jamie Oliver’s ‘Bloomin brilliant’ brownies which used at least a whole block of chocolate, so I was quite skeptical on how they would turn out……..but to my surprise, they were AMAZING and an instant hit in my house. My Mum loved them so much she took them all to work the next day to show her colleagues how good they were.

I ended up making them three weeks in a row so I could try to perfect them. The key is to not overcook them, and if anything, under cook them. It just takes a lot longer to set and if you are not patient it will collapse everywhere if you try to cut them. Another thing I have discovered is that even if you freeze them, they will never freeze completely and will be like fudge. THEN if you want them hot you can reheat them and they they are hot and oozey, great with some vanilla ice cream mmmmmm

1. Preheat oven to 170 degrees.
2. Mix cocoa and sugar in a large bowl.
3. In a pot melt butter then pour over the cocoa mixture and mix well. Let cool.
4. Mix in eggs rigorously until a silky consistency.
5. Add walnuts and almond meal and combine well.
6. Bake for 25 minutes then allow to cool for hours until you cut it (as it will be undercooked) or freeze and then cut it once cooled.
7. Serve cold, like fudge, or warm it up and serve with ice cream.

This entry was posted on August 9, 2011 by forque. It was filed under Uncategorized .